All components of the car are driven by gears through the use of pulleys. The latter needs mechanical energy to function (with the exception of the electric starting point of the battery to start the engine).

We are well aware that the components related to the functioning of the engine are driven by the timing belt. However, there is another important belt in the car, that of services.

What is the Serpentine Belt for? The auxiliary belt has a fundamental function in the vehicle because it has the task of operating the auxiliary elements for the correct functioning of the car.

What is the Serpentine Belt for

Timing belts and Serpentine Belts are not the same things. These are two different elements that play a complementary role in the correct functioning of the engine but act on different components.

The timing belt is positioned inside the engine and is used to synchronize various components such as the crankshaft, camshafts, injection pump, or water pump.

It also coordinates the movements between valves and pistons. If it is out of order or breaks down, the engine could be seriously damaged.

And what is the Serpentine Belt for?

Here is what the Serpentine Belt is for:

What is the Serpentine Belt? 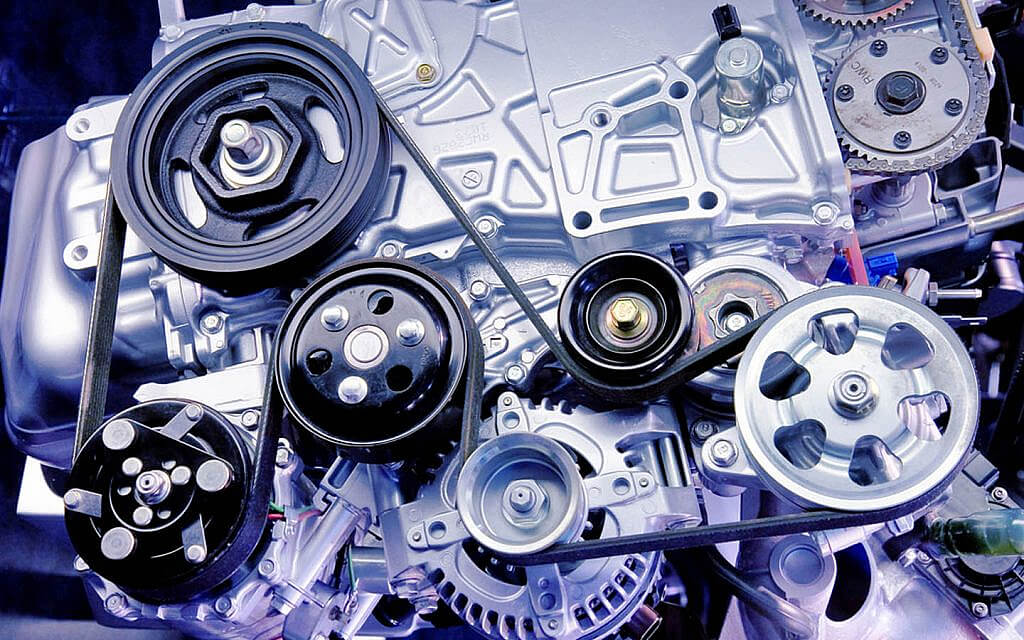 The Serpentine Belt (also called auxiliary or accessory) is an elastic made of flexible composite materials and fibers for strength that is intended to provide energy to the various other components of the car.

It acts as a link between the various moving parts. On the one hand, it takes the driving cue and is located at the end of the crankshaft, on the other, it moves the alternator pulley which produces all the electricity for the vehicle.

Thanks to this strap they are activated

How does the Serpentine Belt work?

The accessory belt works like gear. It is driven by the engine pulley, which in turn drives the Serpentine Belt pulley.

It is kept in tension by means of tensioning rollers. There are two types of accessory belt tensioners:

There are different profiles of this belt: in fact, we speak of the poly-V belt or V-belt:

When should the Serpentine Belt be replaced?

If a broken timing belt can damage the engine – especially if the timing belt is broken while running – the accessory belt is also subject to wear and must be replaced before it deteriorates.

Usually, the replacement of the Serpentine Belt takes place when the timing belt is replaced since it must necessarily be disassembled too.

In any case, being external, it is possible to evaluate the signs of wear and possibly anticipate its replacement.

If the auxiliary belt becomes worn or its tension is abnormal, the engine does not stop but there are signs that something is wrong: you can notice it from how the auxiliary components work and from the illumination of some lights.

If any of these symptoms can be identified before the Serpentine Belt breaks, it is time to replace the belt immediately.

It should also be noted that, depending on the frequency of use of the vehicle and the climate of the region, the auxiliary belt can be damaged to varying degrees. Therefore, you should also pay attention to unusual vehicle noises such as whistling, vibrating, or rumbling.

Also, when the air conditioning no longer works, the steering wheel loses its flexibility and becomes harder, the car starts to lock up and the dashboard lights come on. In these cases, it is best to approach as quickly as possible and contact competent professionals.

Most car manufacturers recommend that the belt be checked periodically (usually at least once a year), but do not specify when it should be replaced.

It is a good practice to change it as soon as it reaches an average mileage between 120,000 and 150,000 km. In any case, it is better to refer to the maintenance booklet provided by the vehicle manufacturer.

What Is A Serpentine Belt | Infographics What Is A Serpentine Belt | Video Explanation

How much does it cost to change the Serpentine Belt?

The price of these car belts depends on the vehicle model and the nature of the intervention. Changing the accessory costs an average of 40 to 100 dollars.

If you also need to change the reels, you need to add between 20 and 100 dollars to this amount. In the event that the operation is carried out in the workshop, labor costs must also be considered.

What to do if the Serpentine Belt Breaks?

Generally, the breakage of the Serpentine Belt is limited to preventing the activation of the auxiliaries operated by it: the alternator stops and does not recharge the battery, the air conditioning no longer works and in some cases, it is not possible to operate the power steering.

Therefore it does not cause serious damage unless pieces of the belt interfere with other moving parts or with the timing pulleys.

However, the advice is to stop and contact a workshop to be assisted by a trusted mechanic

Hi, I am David Bailey a dedicated writer from Linden Bridge School with a degree in mechanical engineering and a degree in marketing. I strive to simplify complex subjects and like to explain complex and technical matters in an easy-to-understand manner. Read More Here

Beasts Car is created with the aim of providing users with information, how-to guides, product reviews, and recommendations. If you are a mechanic, electrician, or just an avid car or motorcycle enthusiast, you will appreciate all the effort we put into here.